The sound of quilting

I have a lot of CDs and when I say a lot I mean it. I am obsessed with music. While I was at university and had no money at all, CDs would have been the first thing I bought, when I had a little money left (which was not often), but who needs to eat when you have something to listen to, that was my credo. So it happens that I have so many CDs  that I don´t seem to know them all. A few years ago I threw away the plastic covers and sorted them into these albums, to save some room. 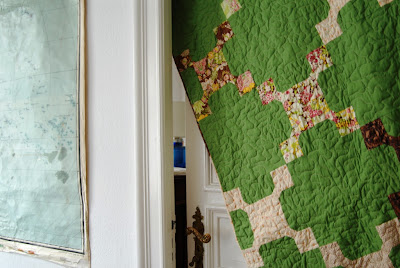 Now I started to listen to all of them, and this brings me to the question:
What is the best soundtrack for quilting?
Yesterday I stood at my ironing board, ironing the seam allowance of a little baby quilt I am working on and I noticed that  DE LA SOUL is absolutely not the right sound for ironing complicated things. I could´nt stop my feet and hips from moving, even when I tried. It was to hard to iron when you whole body is shaking,  so I had to put in another CD. I chose a Eurythmics CD and this was interesting because "Sweet Dreams" catapultud me back to my earlier teen years right away. I closed my eyes and saw me dancing in the "Nachtwerk", one of the hottest clubs in Munich in the early 90s.
But ironing with eyes closed? No good idea either.
Another story: Recently I was chain piecing for another quilt and the CD player was playing "The four seasons" by Antonio Vivaldi (see any music pattern here? I don´t!). I absolutely dug into the music and suddenly I was back in my childhoods house, sitting in my room with a friend  and my stepsister was playing the four seasons on her violine while we where listening to them from the Player (though we where these punky Hippiekids, we loved us some classical music...).  So while I was sewing and listening I suddenly broke into tears because I noticed that these times are gone. These funny afternoons, where we kids where doing things without any sense. We didn´t have to do a lot except going to school and doing our homework. Sometimes being a grown up sucks! I really felt sad, because so many years have passed and sometimes I think I gained nothing. Which is wrong obviously. But you may also now some irrational feelings sometimes, do you?
But the next thought was that I wasn´t that happy teenager all the time, and that I am quite happy know with the person I have become over the years. I think there are not many things I would have done differently.
So these little trips back in time are always a reminder that we are the sum of impressions of these many years. Like a quilt which is a sum of many pieces of fabric.
And in the end, that is a good feeling. Here we are, seen a lot, done a lot, cried and laughed a lot, loved a lot. Now we are what we are, and isn´t that a good thing? 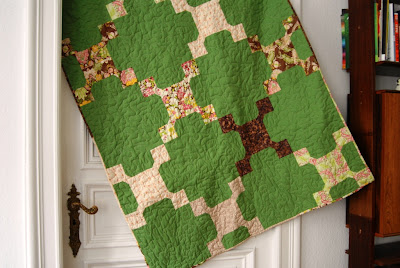 By the way- this is the quilt for my mothers 70th birthday which is in a week. I really like the springy feeling about it, and as she was born on the 21st of march which is springs beginnig, this suits very good.

Have a nice spring time, you all!

And what is your favorite quilt soundtrack?