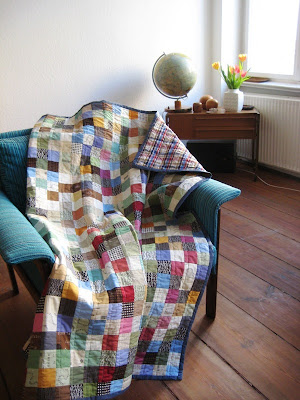 It is finally done. The binding took me ages. But now it is finished and I really like it and I know my friend down under is going to love it.
The funny thing is this quilt was not ment to be for him in the first place. I started it for another reason.Long story, are you ready?

I once had a very good friend(lets call her L.). We´ve been friends since we were 13 years old. We did everything together. I think we were best friends for nearly 20 years. When I moved from Munich to Berlin our friendship still held, but as it is we didn´t see each other very often anymore and also the telefonecalls became less often. But we still were good friends and we missed eachother, I think. Then three years ago L stopped calling. And as I was in stress because of opening my shop and becoming a self employed fashion designer, I didn´t call also. But then, after a while I began to worry and called her, I asked her if she was mad, and she said yes a little and that she will call me the next days and we would talk.
Well that never heppened. I tried to reach her the next weeks, she didn´t reply my messages and calls and after a while there came one email in which she told me she doesn´t want to hear from me anymore, never ever.
She never explained to me what had happened, what I did wrong. After that I went through all feelings: Absolute anger, total sadness, and I couldn´t understand, that after such a long time she wouldn´t give me an explanation.
I am sure that I also did things wrong, but I believe that we always have to talk about things, even if the friendship is over afterwards, but leaving me without any explanation was horrible.
In the last years I always had the same dream about her and I couln´t let go. When I talked about her, or I looked at the pictures from the time we travelled together, went out together or did home facial masks together, I had to cry, in fact I still have to.
And i could not find a way to let go.
Then I read the story of Jennifer
I had the idea that making a goodbye quilt could be a possibility to come over it.
I started to make a L-Quilt in january. I had two jelly rolls of fabric which i bought in Munich when I visited another good friend.
I sewed them together, hated it, ripped everything of again and was angry (like in reality). Some minutes i sat in front of my sewing machine and was crying, because I didn´t know what to do (like in reality). Then I found the postage stamp quiltalong and started to use my jelly rolls for that. It was a perfect symbol, for what our friendship had always been, little pieces of good times and bad times, laughter and tears, love and hate.
And I always thought about what would I do with the quilt, when I am done? I thought about going to munich, giving it to her, try to explain, send it without letting her know that it was from me, keeping it to remind me the good times we had... But nothing seemed right. And then one morning I just felt clear, there was no anger, no worries, no saidness anymore. Just one little sentence: I miss L.
But as I know i can not do anything about it anymore. But you know what? I didn´t dream about her for a longer time now.
And the quilt? When I saw what it would look like, I knew that my friend Paul in Australia would absolutely love it. He never met L he has nothing to do with her, he is far away. Well I see it as a sign, that with sending it to him, making somebody very happy, i can finally let go all the feelings I had over L an our friendship. Make my peace with it.
I really hope that this will last.
So this is the story about the L-Quilt.
Thanks for reading.
Eingestellt von Berlinquilter um 09:21 7 Kommentare:

Wow! For the first time one of my quilt is featured. Heather from Modern Day Quilts posted my Poem Quilt as todays "most awesome" quilt... Yeah. Here it is again: 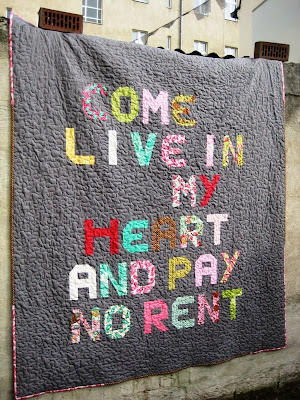 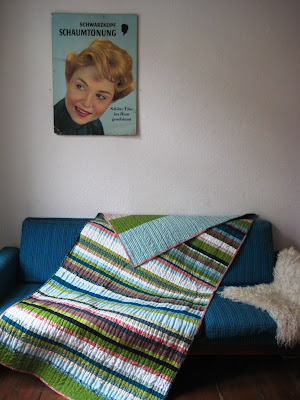 I told you about the Neptune Honey Buns I purchsed a while ago. Here is what I made from it. I didn´t want to waist a single inch and so I made a string quilt (hardly inspired by this)
I quilted it with uneven lines and I really like the style of it, but not the making of straight lines, I prefer stippling. The back is just randomly pieced together, I nearly like the back as much as the front... 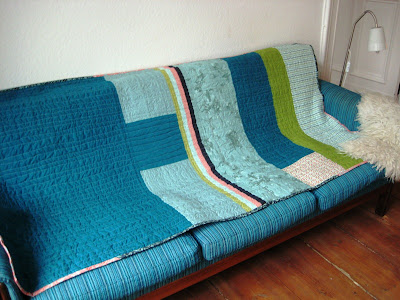 Unfortunately it is a little narrow, so it has a strange size. But I wanted it to be long enough to cover my feet, when I am snuggeling under it on the couch. I had to cut of a bit on the sides, as it was somehow wonky and I tried my best to even it. Well I really like how it looks, I added some teal, green, light brown, aqua and white to "stretch" the honey bun. Because I gave the second one a good friend who totally fell in love with it...
I have to say, I don´t like the honey buns. These narrow strips don´t show the fantastic fabrics enough and you don´t have so many possibilities to work with them (well I don´t know many...) 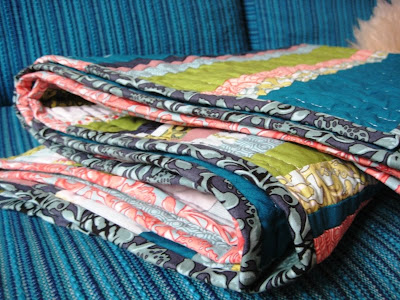 The best recipe for a bad mood... 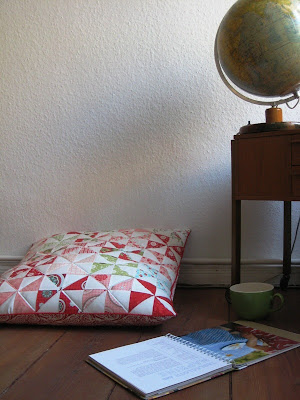 I had a tough time the last two weeks. I am sure everybody knows these times. There are things and circumstances which keep you in this mood and everyday is a struggle. I always try to find ways to let these feelings go and most of the time I can manage it. I think I am a quite positive person. But the last time I really had difficulties to stay positive. It already started in the morning. But two days ago I found the best recipe. I am not the very religious person, but a few weeks ago I started to sing in Berlins biggest Gospel Choir. And so I found out the other morning that the combination of quilting/patchworking and Gospelmusic (listening and singing) is the absolute salvation for me. I started feeling confident and positive again, I had the feeling that as long as I can create,sing and somehow believe, everything will be alright.It gave me strength! I am really grateful for that!

So, long talking, here is one thing I did for pimping my mood.Maybe I can call it the Good Mood Floor Pillow! 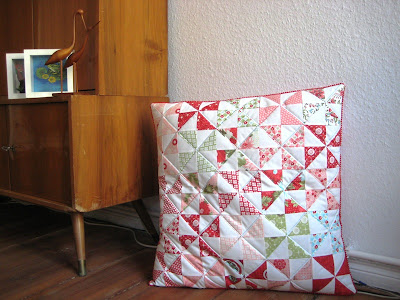 A few weeks ago I visited a fabric shop just around the corner of my own shop. The Lady at Offstoff sells mainly home decor fabrics, but a few designer patchworkfabrics aswell. I was thrilled, when I found some Tula Pinks Neptune inbetween. I talked a little bit to the lady and in an accessory sentence she said that she has some neptune honey buns in stock... I was totally exited and told her that I am going to buy them, no matter how many she has. There where two left, and because she already had them for quite a long time she made me a really good price.
I was so happy, and as I nearly finished one project yesterday, I am going to start a new one today, at least in my head.
This is what I am going to use: 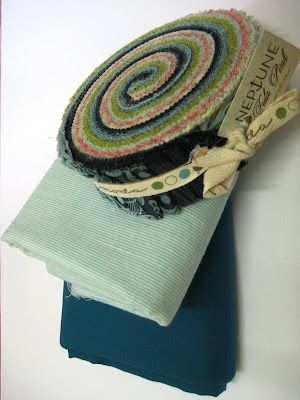 Edit:
Sometimes the pictures I upload, turn as they want, I don´t know why and how to fix it. If anyone has an idea, I would really apreciate an advice!
Eingestellt von Berlinquilter um 14:36 4 Kommentare: 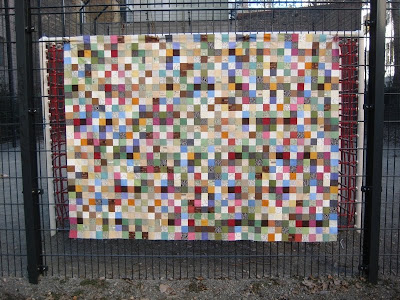 I have the feeling I didn´t finish something for ages. But today the postage stamp quilt was done finally. I really like how it turned out, allthough these are not my colours. I won´t keep it. A good friends birthday is in may and he is going to get it, as these are also some not to girly colours. 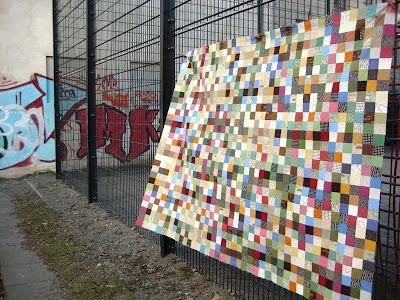 For taking the picture I went out of my shop and pinned the top on the fence just behind the little soccer field. Luckily the kids of the neighbourhood were still at school, so didn´t need to explain myself...Well in the middle of a big city like Berlin it is not easy to find the right fotoshooting spot for a quilt... 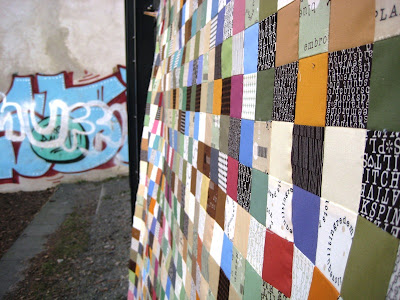 Well, with the pickledish quilt I progress so I hope to finish this in about two weeks...
Just because I want to finish it before I start another one. And unfortunately there are so many ideas swimming around in my head.I help myself with making pillow covers and little stuff.
SSo this is it from here, have a nice day you all! 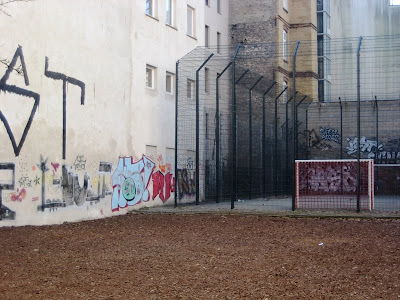